My fishing and camping adventure by the Red Sea 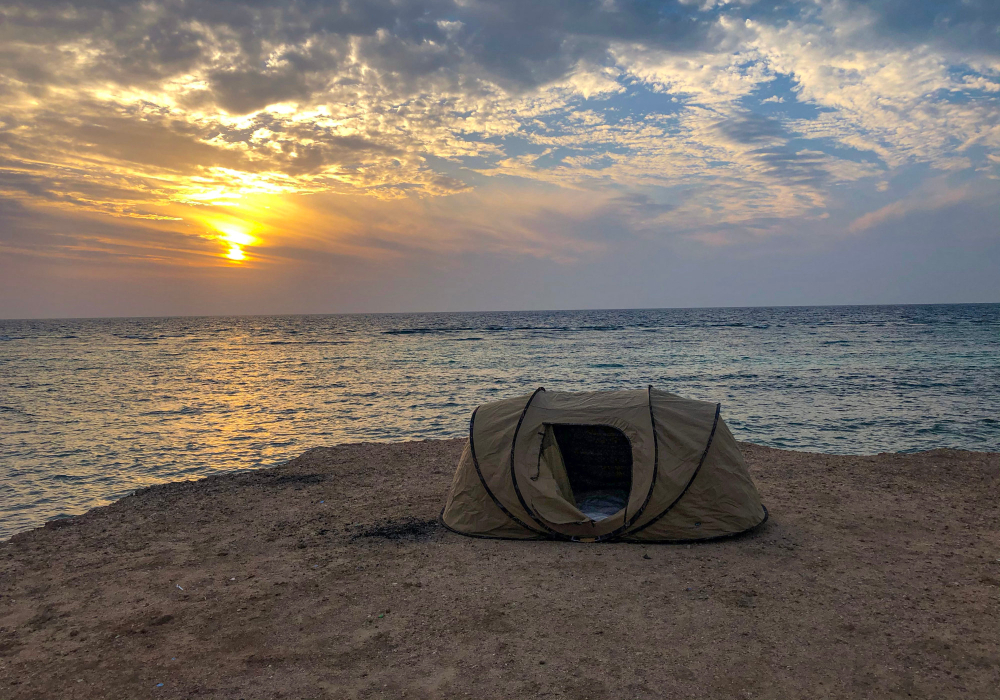 They say that luck happens when preparation meets opportunity. Well, I recently had to cut short a planned 16-day self-drive tour of Saudi Arabia only on the fourth day due to coronavirus restrictions announced by the government. My original itinerary included mostly hotel stays during the first week and mainly camping on the second week – as I hoped to make my way around remote sites in Tabuk Province.

So I had purchased a nice tent and some camping gear. When I had to cancel most of my trip, all of this was still at hand a few days later as I hadn't yet gotten around to storing anything. What are those stages of grief again? Well, I don't think I was at the acceptance part yet.

On the first weekend since returning from my aborted tour, I headed just a 20-minute drive north of the fishing village of Thuwal, where I live, to enjoy the breeze and views of the Red Sea shore. As I parked my car on a small rock elevation overlooking a tiny open section of the sprawling beachfront, which interrupted a long rocky shore, two cars pulled up onto the beach to my left.

I could tell they were pretty experienced fishermen as they started lining up their fishing rods and preparing their bait. We soon struck up up a conversation and I learned that they regularly came here on Fridays to fish and stayed overnight. I first met Falah; a young Saudi engineer and father of one who lives in Jeddah and also works as a policeman.

His brother Salah also soon arrived from his home of Makkah where he works as a manager for the Jawazat general directorate of passports. We would later be joined by his eldest brother, Omar, who also lives in Makkah and works as an elementary school mathematics teacher.

Falah proudly let me know that his family traces many generations in his homeland. "Over a thousand years," he said. "We are real Saudis."

Along with them was Kamel, an Egyptian from Alexandria who has lived in Saudi Arabia for twenty years. He works as a calligraphy teacher. He pulled up his Instagram account to show me his impressive work. I was equally impressed by his over ten thousand followers. 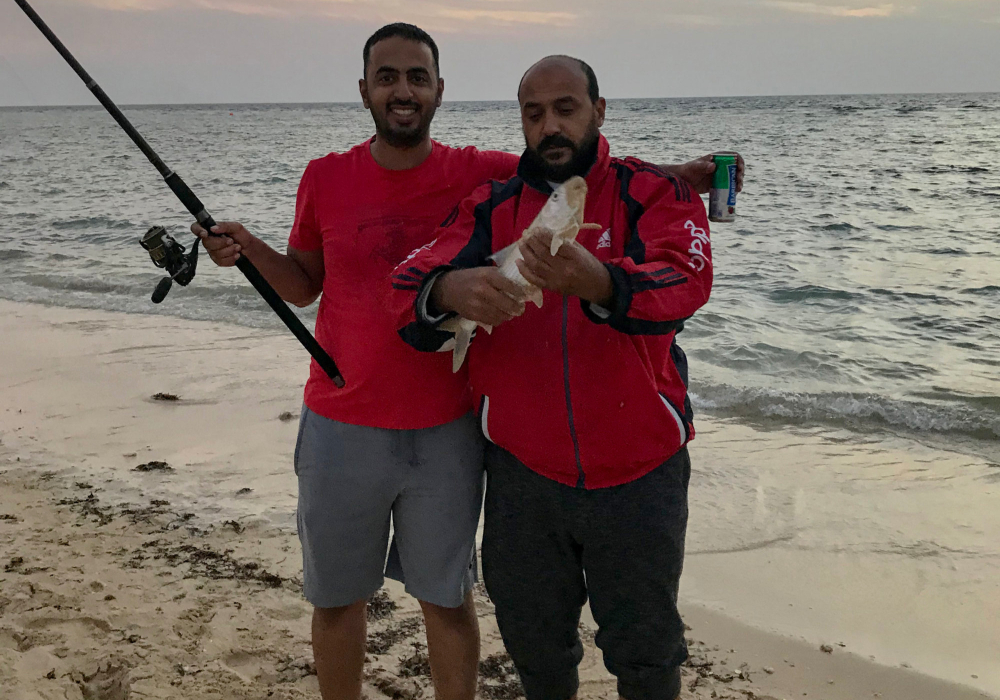 While Kamel's Instagram doesn't have any pictures of himself or his fishing (but check out his cool calligraphy), his iPhone's photos were full of trophy shots of many of the big fish he's caught over the years. He took a lot of pleasure in scrolling through his album to share his exploits. But funny enough, despite being an avid fisherman, Kamel doesn't eat fish. Since he was a kid, he never liked it.

"I share the fish I catch with my friends," he said. He promised to gift my spouse and me the first fish he caught that day. But he insisted that we stuck around to see them in action.

True to the legendary Arab hospitality, they invited us to stay the night. "My bother Salah is coming soon with food," Falah said. He did arrive not too long after with some tasty chicken mandi.

There was my opportunity to finally use my tent I had hoped to spend northern nights under the stars with. Even though I had been familiar with this beach for years, I never thought it would be possible to spend the night there. The beach is located on the grounds of King Abdullah Economic City (KAEC), and I knew the area was regularly being patrolled by security.

Sure enough, by the time 1:00 a.m. rolled around, we were the only souls in sight, and all we could hear were the waves of the Red Sea flowing onto the beach where we set up camp. The silence and darkness were, right around that time, interrupted by the arrival of Falah's eldest brother, Omar, in the white 4x4 he had driven in with from Makkah. Omar came bearing treats in the form of delicious dried fruits and Arabic coffee.

It was a good night of fishing. I could hear little bells ringing in the distance in the sea from my tent whenever something caught the bait of one of the several fishing rods lined up along the beach. Every time they caught a fish, they would check if I was still awake so I could come take a picture.

Maybe next time, I'll work on getting some skills to participate in the fishing.