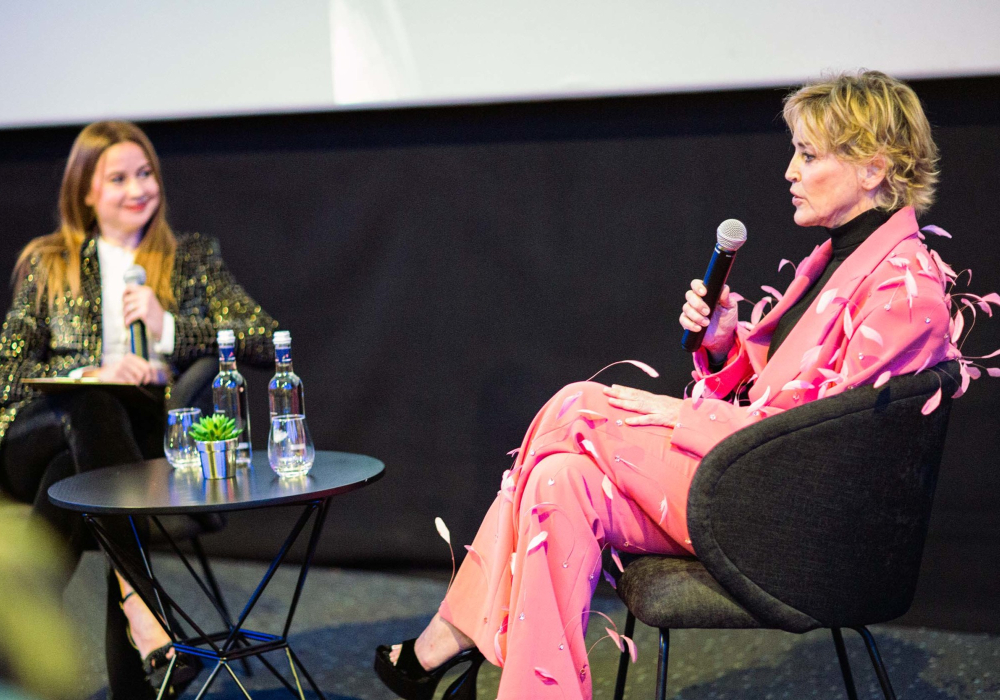 As part of an intimate and, at times, emotional conversation during the second annual Red Sea International Film Festival in Jeddah, Saudi Arabia, American actress Sharon Stone candidly shared the story of her sudden and unexpected entry into the world of stardom.

She recalled attending the Cannes Film Festival for the first time when the film Basic Instinct opened the 45th edition of the iconic festival in the south of France in May 1992. She had lost her luggage and needed to convince her producers to buy her a dress for the premiere. This small detail would foreshadow years of struggle to be recognized and fully valued as a female actor in Hollywood.

"I don't think anyone thought that the movie was going to do what it did," she said. "I went into the theatre as one person and came out of the theatre as a superstar."

By the time she returned to her regular hotel on the Croisette, her room had been robbed. Everything was gone. "My contact lenses, my toothbrush, my camera, my film, my underwear ... it was just mayhem."

Stone also shared an anecdote back in Los Angeles where she was driving her small 325i BMW and suddenly saw people piling on top of her car at an intersection.

Stone remembers thinking: "Do I drive with these people on my car? Will I get arrested if they fall off and I hurt them? What's the law about driving with people on the outside of my car? What am I supposed to do?"

You're a star now

She believes that no one is really prepared for fame. "Marilyn Monroe didn't start out as Marilyn Monroe. She was Norma Jean Baker from somewhere else," as she reflected. Stone admits she was at all sure how to deal with this tsunami. She initially thought she was claustrophobic, so she booked an appointment with a psychiatrist.

"I just kept thinking something's wrong with me."

The psychiatrist asked: "Is that you on the poster on the corner?" She replied yes. The next question was: "Do you have a car, a driver, and maybe a bodyguard? To that, Stone replied no.

"Your life has dramatically changed, and now you need a car with a driver and a bodyguard. And this session is free because no one is prepared to be famous."

"I want to give you a little piece of advice," the psychiatrist added. "You have to get a car with a driver. You can't drive alone anymore, and you're going to need a bodyguard."

How to pay for this new lifestyle?

The advice was clear and unequivocal. Changes had to be made because her life was no longer the same. But who was going to pay for all this?

"I made $500,000, and Michael Douglas made $14 million. So Michael Douglas could afford the car and the driver, the bodyguard, I had to move because people were on my roof and breaking my door down. And so I couldn't afford all the things I needed for my sudden fame. And then the studio didn't want to pay me millions of dollars because I was a woman."

The room at the Red Sea Mall theatre that afternoon was in shock. But should we really have been?

That's how Sharon Stone's battle to start talking to studios to pay female actors more than $1 million began. '[It] had never happened before. And it was a really big moment, not just for me, but for the film industry," she said.

Immediately, there was a massive backlash because people assumed she was like her character, Catherine Tramell, in Basic Instinct. She was accused of being vulgar. She even lost custody of her first child because the judge felt the kinds of movies she made were not a good example.

Stone said it took over twenty years for the quality of her work to be acknowledged. People in the room first laughed at her openly when she was originally nominated for a Golden Globe; but two decades later, those same groups of people in the room applauded her for the work she had done for women's rights.

Stone was asked how these changes continue to evolve and are still needed in many other areas beyond the film set and around the world.

"I think it starts out with recognizing that God made everyone and God didn't make a mistake," she said. "We are all here to serve each other. Women are not here just to serve men. Men are also here to serve women. And if we are not serving equally then we are disrespecting our maker. We are here to be of service to the greater good."

"We are here to see each and every person with the love and grace that our God gave us in the creation of us."